I spent the summer thinking about what has been my favourite projects, and what I really want to do in the future. I've really enjoyed the few directing jobs I've done, so I have decided that I should pursue my goal of becoming a director. Now, a director needs a proper website, and this one is just one big mess. So I made a new one!

More stuff in the work section

www.superrune.com will be the home of my personal projects, it's the home of my blog and software, but it will probably get a lot messier in the future. To slim it down a little I decided to merge my 3D and Illustration Gallery into one Project Gallery. And just for fun, I am putting back some of my earliest artwork, first out are some of the images I did on the Commodore 64.

Big news all around!

At half past seven, the 13th of August, my girlfriend gave birth to a lovely baby girl! At 4 kilograms and 51 centimeters, she wasn't exactly small, but then she's not that big either. Anyway, she's my most cherished creation so far, and I'm really looking forward getting to know her.

Of course, there's some new stuff on the site as well. I have updated the project gallery, so there are three more projects in there to look at. I've got some other exciting projects ahead, looking forward to sharing them with you.

Here's a teaser image of one of my personal projects. They are businessmen in love, how sweet :) You'll see more images from this project pretty soon... 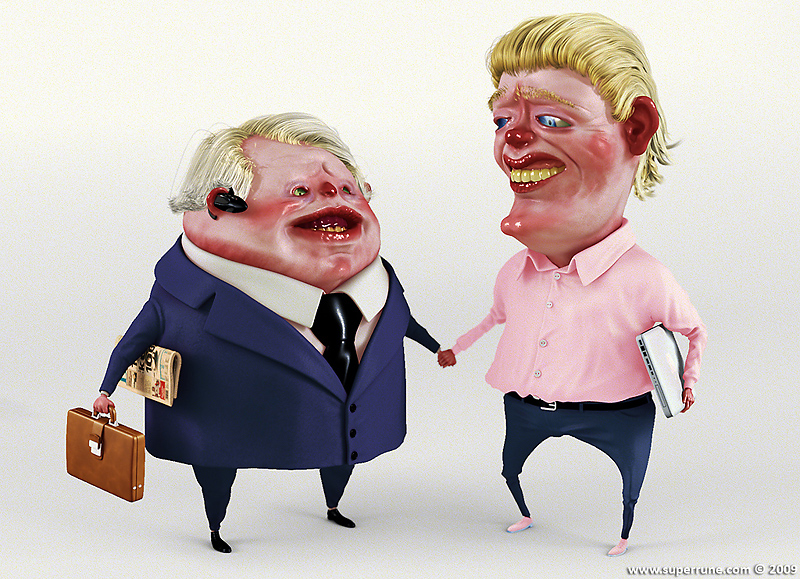 Pixelpark and a monster pitch

I dug through my backup disks the other day, searching for some old models, and found these two projects that deserved a place in my portfolio. Both of them very done at Toxic. The first one is a commercial for the german company Pixelpark. It is very different from most of the 3D work I traditionally do, being more a stylized and design-type film. Click here to read about it and see a quicktime of the commercial.

The second is portfolio piece is a quick pitch I did for a video game teaser trailer. I lost the pitch, but it's still a nice part of my portfolio. Click here to read more about it.

New projects in the galleries

I have put up two more projects in the 3D Gallery. First is a commercial I co-directed this February for Stratos chocolate. It features a dancing cow, which is a new one for me. Click here to read about it and see a quicktime of the commercial.

Second is a teaser trailer for a video game called 'tisu. I can only show a couple of stills from it for now, but I will be able to show more later. Click here to see them, and to read a little bit about the project.

Since I left Toxic, 90% of the projects I have done have been character-based, which is great! This is definately the way I want to see my career going. Most of these projects have been fairly traditional, though. But that's too expect, if you look at the stuff I have in my portfolio. It's very easy to get pidgeonholed in this business (in any business, I assume). Before the end of the year, I hope to have some examples animated out that demonstrate some of the more experimental styles I want to do. Above you see one of the characters I am working on in my spare time.

The new version of the superCubic plugin is now on the site. This version is a bit more memory-efficient, and I have been able to convert panos up to 50.000 pixels wide in this version. This update also takes care of a bug that caused an erroneous pixel line at the beginning of the unwrapped pano. I have also renamed the plugin to 'superCubic', since people mistakenly called the plugin 'superrune'. Finally, I have updated the tutorial on how to use the plugin, which should clarify a couple of issues with the workflow. Click here to download the plugin and read more about it.

I have also done some minor updates on the site itself. The most significant one is that I pulled out the old blog-system and programmed a simple one myself. It's much easier to update the blog now, and I hope my posting-frequency will go up from the two-posts-per-year ratio that I've been on. We will see :)